In late 1941, the Soviet Union received ten North American Mustang Mk. Is from the Royal Air Force. Acquired by the RAF for use as tactical reconnaissance and fighter-bomber in early 1941, the British sent the Mk. Is to the Soviet Union (along with Hawker Hurricanes and Curtis P-40 Warhawks) in late 1941 and early 1942 in an attempt to strengthen the aerial arm of the Soviet military after the major losses suffered by the VVS and VMF (Soviet Air Force and Navy) during Operation Barbarossa. Indeed, on the first day of the war, an estimated 1,200 Soviet aircraft were destroyed by the Luftwaffe, and the aircraft that the VVS had left in its arsenal in the summer of 1941 were mostly obsolete LaGG-3 and I-16 fighters, or I-15 and I-513 biplanes. What is more, due to the fact that the majority of the aviation industry was located in the Western part of the country, the Soviet Union was forced to undergo the herculian task of evacuating hundreds of aviation manufacturing facilities to the other side of the Urals, no small task even in times of peace. Consequently, in late 1941, the Soviet Air Force was in a dire situation, and was in desperate need of fighters to halt the Luftwaffe’s onslaught until the aviation industry could recover from its massive evacuation.

Well aware of the situation of its new and unlikely ally, England began sending its own fighters to help bolster the Soviet air arm. As early as August of 1941, RAF squadrons began deliveries of Hawker Hurricanes Mk. II to the Soviet Union (nearly 3,000 would eventually be flown by the VVS and VMF), and even began diverting US-built P-40s to the Eastern Front (2,200 would be delivered from both the UK and the US from 1941-1944). Though both fighters had their drawbacks, deliveries of P-40s and Hawker Hurricanes to the Soviet Union in 1941 helped the VVS and VMF stave off the Luftwaffe until the Soviet aviation industry could get up and running (after the US entered World War II in December, however, the Soviet Union was included in the Lend-Lease Act and eventually went on to receive thousands of US-built aircraft).  Soviet pilots were generally not as enthusiastic about the Hurricanes and P-40s that they received from the RAF in 1941 as they would be about the Bell P-39 Airacobras that they began to fly the following year, but the two types proved to be effective in the hands of skilled Soviet pilots (Boris Safonov scored the majority of his 26 confirmed aerial victories while flying the Hurricane before he was killed in 1942). As part of the UK’s attempts to prop up the Soviet VVS following the disastrous summer of 1941, at a time when the UK itself had an acute shortage of quality aircraft, the decision was made to send a small batch of the RAF’s newest but hitherto untested fighter for evaluation by Soviet engineers: the North American Aviation Mustang Mk. I. 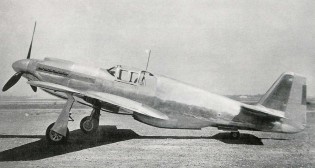 The Mustang, which later received the designation P-51 while in service with the USAAF, would go on to gain notoriety as one of the best fighters of the Second World War. In 1941, however, the Mustang was a brand new aircraft that had not received its baptism of fire. Indeed, the aircraft’s origins were humble, and was only manufactured out of sheer necessity. After being approached by the British Direct Purchase Committee (BDPC) in the Spring of 1940 with a request to build the Curtis P-40 for the RAF under license, North American Aviation suggested building a brand new fighter instead of producing an aircraft that had already shown signs of obsolescence. NAA’s President,  James H. “Dutch” Kindelberger, proposed building a single-engine fighter from the ground up using the same Allison 1710-39 that powered the P-40 (the later  B,C,D, and K variants of the P-51 would be powered by the elegant Packard Merlin engine). Promising superior performance, firepower, and range, Kindelberger persuaded the BDPC to accept NAA’s proposal, despite the fact that, up until this point, the company had never manufactured a combat aircraft from scratch.

On October 26, 1940, the resulting aircraft, designated NA-37X, made its first flight, and the following October, after successfully completing NAA’s test program, the first production example arrived in the UK. RAF pilots were pleased with the new aircraft, which had been christened the Mustang Mk. I, and those who evaluated the US-built aircraft reported it to be faster and more maneuverable than the Spitfire Mk. V up to 15,000 feet (4,500 meters). However, like the P-40 and P-39, the Mustang’s Allison engine, which lacked a two-stage supercharger, meant the aircraft’s performance decrease significantly above 20,000 feet (6,100 meters). Consequently, the RAF used the Mustang Mk. Is primarily for tactical reconnaissance and ground-attack duties. 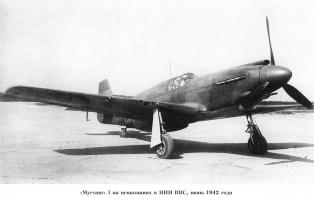 The Soviet VVS, on the other hand, did not deem the Mustang fit for operational service on the Eastern Front at any altitude. The first two Mustangs arrived in the Soviet Union on December 16th, 1941, and the tenth (and final) aircraft arrived six months later. However, it wasn’t until June of 1942 that the Mk.I underwent state testing at the State Air Force Research Institute. The test pilot, V.E. Golofastov, reported that though the Mustang’s low-altitude speed was sufficient, it was lower than the Yakovlev Yak-7B’s by 6-30 mph (10-50 km/h). Moreover, Golofatsov noted that the Mk. I’s rate of climb was inferior to that of the Yak-7B and the German Bf-109. The Soviet pilot did, however, admire the Mustang’s armament which consisted of four 12.7 mm and four 7.62 mm Browning M2 machine guns. Nevertheless, the State Air Force Research Institute made it clear that the Bell P-39 Airacobra, of which deliveries from the US had begun several months prior, was a better fit for the VVS.

Despite the fact that the Mk.I did not impress Soviet pilots and engineers during state tests, three Mustangs were sent to the 3rd Air Army on the Kalinin Front for combat trials in the fall of 1942. Two aircraft were flown by the 5th Guards Fighter Regiment, which at the time was equipped with LaGG-3s. Among those who flew the Mustangs was Hero of the Soviet Union V.A. Zaytsev (34 aerial victories) and future Hero of the Soviet Union V.I. Popkov (41 victories). In his memoirs, Popkov gave the Mustangs a negative review. According to him, although the aircraft’s speed was sufficient, “it was heavy, like iron”. The Soviet ace also noted that the Mk.I’s maneuverability left much to be desired, and its rate of climb was poor compared to other fighters available at the time. Another five Mustangs were sent to the 6th Reserve Brigade near Ivanovo where they were used to help convert Soviet pilots to US-built aircraft, and the other two found their way to the Air Force Academy and the Central AeroHydrodynamic Institute. Although the Luftwaffe claimed that two Soviet P-51s were shot down over Karelia in late 1943, the VVS never used its Mustangs in combat, and the German pilots more than likely misidentified the aircraft that were shot down.

The RAF did have a certain degree of success with the Allison-powered Mustangs, but it was not until North American Aircraft produced the P-51B and P-51C variants that the Mustang became the dominant aircraft of World War II. Powered by the elegant Packard (Rolls Royce) Merlin engine, the B & C variants transformed the air war over Western Europe as a whole. With its two 75 US gal (280 liter) external drop tanks, the Merlin-powered P-51B/C was introduced as a bomber escort with a combat radius of 750 miles (1,210 km), which allowed bombers to retain their escorts deep into German territory. An additional 85 US gal (320 liter) fuel tank was later installed aft of the pilot’s seat, which improved the fighter’s range even more. The Mustang continued to improve with the D and K models, which were, in many historians’ opinions, the best fighters of the Second World War. The P-51D/K featured two 110 US gal (416 liter ) drop tanks, which increased the Mustang’s combat range to an astounding 1,000 mi (1,609 km).

While the P-51 undoubtedly had a tremendous impact on the USAAF & RAF’s Combined Bomber Offensive in Western Europe, it is important to bear in mind the differences of the air war fought on the Eastern Front, where dogfights were typically conducted at low altitudes since the VVS focused on providing close air support to Red Army ground troops, and in the West, where fighters fought off German Bf-109s and Fw-190s that attempted to intercept strategic bombers at high altitudes (10,000 meters/33,000 feet or above). Moreover, the Soviet Air Force operated primarily from forward airstrips, which were often times located only several minutes from Axis-held encampments, which in turn meant range was not nearly as crucial for Soviet fighters as it was for those in the West. Indeed, one of the Soviet Union’s best domestically-built fighters of the war, the Yakovlev Yak-3, had a combat range of only 325 km (203 miles).

Soviet Yak-9s and US B-17s during Operation Frantic. Public domain.

The VVS did acquire a number of P-51Ds that were left behind following following Operation Frantic, a series of shuttle bombing operations in 1944 in which US aircraft used Soviet airfields to hit Axis targets in Southern and Eastern Europe. Though full flight tests were not conducted on the war-weary P-51Ds, several Soviet pilots flew the aircraft, and reported that the Merlin-powered Mustang was inferior to the Yak-3, Yak-9, and La-5FN at low and medium altitudes, but was superior above 5,000 meters (16,000 feet). Soviet engineers showed little interest in examining the P-51’s technology, unlike the B-29, which the Tupolev Design Bureau would later reverse engineer to create the Tu-4 strategic bomber after the war.

Although the Mustang went on to become a game changer in the air war over Western Europe, when Soviet test pilots evaluated their ten Allison-powered Mk.Is in 1942, it was determined that Soviet-built aircraft and the Bell P-39 Airacobra were more well-suited for the VVS and VMF. Indeed, two other types that are considered to be among the best fighters of World War II in the West, the Republic P-47 and the Supermarine Spitfire, were both flown operationally by Soviet forces, but were deemed to be inferior to the Yak-3, Yak-9, La-5FN, and P-39 while in combat over the Eastern Front. Even though the Allison-powered Mustang was well-liked by RAF pilots and USAAF pilots who flew the A-36 dive-bomber variant of the Mustang, it was not fated to have an impact on the Eastern Front.

One thought on “The Soviet Union’s US-built Mustang Mk. I fighters”