With 50 confirmed aerial victories, Dmitry Glinka was one of the top Allied aces of World War II. Like most Soviet aces, Dmitry Glinka came from a modest background. Born to a family of miners just a month after the October Revolution of 1917, Dmitry (not to be confused with his brother Boris, also a Soviet ace) began working as an electrician for the MOPRa mine in 1932. After developing an intense interest in aviation, Glinka joined the Krivoy Rog Aeroclub, and entered the Kachin Red Flying School, from which he graduated in 1939.

After graduation, Glinka was assigned to the Transcaucasian Military District’s Air Force Fighter Wing near the city of Baku in the Azerbaijani Soviet Socialist Republic. In the summer of 1941, in the wake of Germany’s invasion of the Soviet Union, Glinka was assigned to the 45th IAP, which was stationed in Iran during the Anglo-Soviet invasion of the country in August and September. Equipped with a Polikarpov I-16, Glinka did not fly any combat missions during the invasion, but did manage to fly several hundred sorties in the “Rata” before the 45th IAP was transferred to the Crimean Front in early 1942.

Upon the 45th’s transfer, Glinka was reequipped with a Yakovlev Yak-1 single-engine fighter. On April 9th, 1942, Dmitry Glinka shot down his first German aircraft, a Ju-88 twin-engine bomber. From there, the young pilot found his stride, shooting down another Ju-88 later that month, and a Messerschmitt Bf-109 single-engine fighter on May 8th. The following day, Glinka achieved ace status when he shot down three Ju-87 Stuka dive-bombers. Several days later, Glinka himself was shot down. Waking up in the hospital without recollection of bailing out of his doomed Yak, his doctors grounded him for two months so he could recover from a severe concussion.

Glinka’s return to the regiment in July coincided with the arrival of a fresh batch of pilots to the 45th, including Ivan Babak, who Glinka chose as his wingman (Babak himself would go on to have 35 aerial victories during the war). In February of the following year, the regiment was refitted with lend-lease P-39s Airacobras, and in March was thrown into the Battle of the Kuban. In perhaps the fiercest aerial combat of the entire war, Dmitry Glinka shot down 20 German aircraft, making him one of the most successful pilots of the pivotal campaign. One battle, in particular, brought Glinka notoriety, when he led a flight of six P-39s against an armada of sixty German bombers (Ju-87s and Ju-88s) and eight Bf-109s. The Soviet fighters were able to sow confusion into the ranks of the Luftwaffe aircraft, forcing them to ditch their bombs and turn around. During the melee, Glinka was able to down two Junkers and one Messerschmitt. Years later, the great aircraft designer, Alexander Yakovlev, recalled this battle, exclaiming, “It is difficult to visualize the picture of this battle! After 68 enemy aircraft aimed more than 150 gun barrels at our fighters. You had to have insane courage… to rush into such a battle and be victorious.”

However, not long after, Glinka was again shot down, this time by the rear gunner of a Ju-87 Stuka, but not before he shot down two Ju-88s. Forced to parachute out of his destroyed P-39, he spent two weeks in the hospital recuperating, and returned to his regiment with his arm still in a splint. On April 24th, 1943, for his courage, bravery and heroism displayed against the enemy over the Kuban, Dmitry Glinka was awarded the Gold Star Hero of the Soviet Union.

Immediately after the Battle of the Kuban, the 45th, which by then had been designated the 100th Guards IAP, participated in the Miusskaya offensive, during which time Glinka continued to increase his tally. By September of 1943, the Soviet ace had shot down 38 German aircraft, and he consequently received his second Gold Star Hero of the Soviet Union. That same month, Glinka had another close encounter, when a German grenade that he had been examining blew up. Fortunately for him, the explosion caused only minor wounds, and he was back in the air within several days. 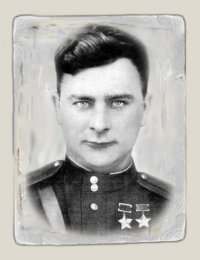 The 100th GIAP then received a much deserved 6-month rest in late 1943 and early 1944. In the spring of 1944, the regiment was sent to provide air cover the Second and Third Ukrainian Fronts for the Jassy–Kishinev Offensives. In the first week of May, Glinka had yet another brush with death when a Li-2 transport aircraft on which he was traveling crashed into a mountain. Sustaining serious injuries in the crash, Glinka lay in the wreckage for two days before being rescued.  In July, after spending two months in the hospital, Glinka rejoined his regiment, which had been sent to provide air cover for the Lvov–Sandomierz Offensive. During the operation, the Soviet ace shot down nine German planes, raising his score to 46. Glinka was inactive until the Battle of Berlin the following spring, where he shot down two Bf-109s and two Fw-190s.

Throughout the course of the war, Dmitry Borisovich Glinka flew 300 sorties and fought in more than 100 air battles. When the war officially ended on May 9th, 1945, Glinka had shown down 50 German aircraft (11 in a Yak-1, and 39 in a P-39), and making him the sixth highest scoring Allied ace of WWII. After the war, Glinka continued his career in the VVS, first commanding a regiment, and later becoming deputy commander of a division. In 1960, he was discharged from the Soviet military with the rank of colonel. He died in 1979.

One thought on “Dmitry Glinka, a Soviet P-39 ace with 50 aerial victories”