Receiving more than 5,000 P-39s through the lend-lease program, the Airacobra was one of the VVS’ most lethal weapons during the Great Patriotic War. Soviet aces such as Aleksandr Pokryshkin, Grigory Rechkalov, and the Glinka brothers racked up dozens of kills flying the unique aircraft. While many historians and aircraft enthusiasts in the West are aware that the P-39 had a tremendous impact on the Eastern Front, there are many misconceptions surrounding how, exactly, the Airacobra was used by Soviet pilots, as many erroneously believe that these particular aircraft were used primarily in the role of close air support.

By reading first-hand accounts of Soviet pilots who flew the P-39, one immediately can see that this is a gross misconception of the Airacobra’s role which, as it turns out, stems from a mistranslation used by writers in the West after World War II. Russian-language sources use the term prikrytiye sukhoputnykh voysk to describe the role of P-39s on the Eastern Front, which translates to coverage of ground forces. Indeed, this is what Airacobra pilots did, though in a way that differs significantly from close air support. Because of this error, many in the West hold the notion that these aircraft were used as “tank busters” and were primarily engaged in ground attack operations. While Airacobra pilots undoubtedly strafed targets on the ground (especially towards the end of the war), the P-39’s primary mission was to intercept German dive bombers and their escorts that were attempting to carry out close air support for the Wehrmacht. As these missions naturally entailed flying at lower altitudes (P-39s did not have two-stage superchargers), the Airacobras and Soviet pilots excelled at providing such coverage for ground forces. 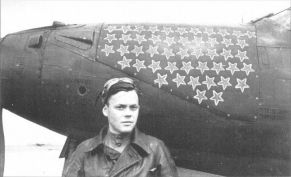 Grigoriy Rechkalov and his P-39

Towards the end of the war, after the VVS had gained air superiority, P-39s, like all Soviet aircraft, were employed as ground attack aircraft. A directive issued on September 7, 1944, explained “at the present time, when our air forces have garnered and are maintaining unquestioned air superiority, all the conditions have been created for the broadest employment of fighters for defeat of enemy ground targets with bombs and machine guns and cannon fire.” Airacobras were consequently fitted with single RRAB-70 70 kg bombs for the battles around Berlin. While the P-39 was built around a 37mm cannon, Soviet fighter units equipped with these aircraft did not have the armor-piercing ammunition necessary to penetrate the turrets of German tanks and assault gun covers. Nevertheless, with their cannons (without armor-piercing rounds), .50 caliber machine guns, and 70kg bombs the Soviet P-39s were adept at carrying out ground attack operations in the final months of the war.

As was the case with other Soviet fighters, P-39s engaged in close air support operations only towards the end of the war and only after air superiority was achieved. While Airabocras undoubtedly contributed to the victory over Germany in this role, their primary task was to provide air coverage over the front line, a task at which they excelled. Indeed, Aleksandr Pokryshkin scored 47 of his 65 victories flying his P-39 and Grigoriy Rechkalov scored 44 of his 56 in an Airacobra. In the hands of skilled Soviet pilots, the P-39 was as deadly as any other aircraft over the skies of the Eastern Front.